The following is taken from Mike Rowe’s Facebook page: 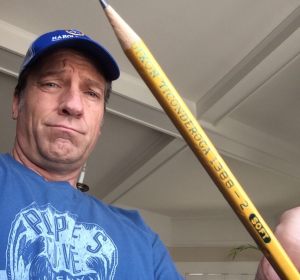 Howard Dean recently criticized Gov Scott Walker for never finishing college, stating that he was “unknowledgeable.” What would your response be on college as a requirement for elected office?

Back in 1990, The QVC Cable Shopping Channel was conducting a national talent search. I had no qualifications to speak of, but I needed a job, and thought TV might be a fun way to pay the bills. So I showed up at The Marriott in downtown Baltimore with a few hundred other hopefuls, and waited for a chance to audition. When it was my turn, the elevator took me to the top floor, where a man no expression led me into a suite and asked me to take a seat behind a large desk. Across from the desk, there was a camera on a tripod. On the desk was a digital timer with an LED display. I took a seat as the man clipped a microphone on my shirt and explained the situation.

“The purpose of this audition is to see if you can talk for eight minutes without stuttering, blathering, passing out, or throwing up. Any questions?”

“What would you like me to talk about,” I asked.

The man pulled a pencil from behind his ear and rolled it across the desk. “Talk to me about that pencil. Sell it. Make me want it. But be yourself. If you can do that for eight minutes, the job is yours. Ok?”

I looked at the pencil. It was yellow. It had a point on one end, and an eraser on the other. On the side were the words, Dixon Ticonderoga Number 2 SOFT.

The man set the timer to 8:00, and walked behind the tripod. He pressed a button and a red light appeared on the camera. He pressed another button and the timer began to count backwards. “Action,” he said. I picked up the pencil and started talking.

“Hi there. My name’s Mike Rowe, and I only have eight minutes to tell you why this is finest pencil on Planet Earth. So let’s get right to it.”

I opened the desk drawer and found a piece of hotel stationary, right where I hoped it would be. I picked up the pencil and wrote the word, QUALITY in capital letters. I held the paper toward the camera.

“As you can plainly see, The #2 Dixon Ticonderoga leaves a bold, unmistakable line, far superior to the thin and wispy wake left by the #3, or the fat, sloppy skid mark of the unwieldy #1. Best of all, the Ticonderoga is not filled with actual lead, but “madagascar graphite,” a far safer alternative for anyone who likes to chew on their writing implements.”

To underscore the claim, I licked the point. I then discussed the many advantages of the Ticonderoga’s color.

“A vibrant yellow, perfectly suited for an object that needs to stand out from the clutter of a desk drawer.”

I commented on the comfort of it’s design.

“Unlike those completely round pencils that press hard into the web of your hand, the Ticonderoga’s circumference is comprised of eight, gently planed surfaces, which dramatically reduce fatigue, and make writing for extended periods an absolute delight.”

I pointed out the “enhanced eraser,” which was “guaranteed to still be there – even when the pencil was sharpened down to an unusable nub.”

I opined about handmade craftsmanship and American made quality. I talked about the feel of real wood.

“In a world overrun with plastic and high tech gadgets, isn’t it comforting to know that some things haven’t evolved into something shiny and gleaming and completely unrecognizable?’”

“Pen and ink are fine for memorializing contracts,” I said, “but real progress relies on the ability to erase and start anew. Archimedes said he could move the world with a lever long enough, but when it came to proving it, he needed a pencil to make the point.”

With three minutes remaining, I moved on to some personal recollections about the role of pencils in my own life. My first legible signature, my first book report, my first crossword puzzle, and of course, my first love letter. I may have even worked up a tear as I recalled the innocence of my youth, scribbled out on a piece of looseleaf with all the hope and passion a desperate 6th grader could muster…courtesy of a #2 pencil.

With :30 seconds left on the timer, I looked fondly at the Dixon Ticonderoga, and sat silently for five seconds. Then I wrapped it up.

“We call it a pencil, because all things need a name. But today, let’s call it what it really is. A time machine. A match maker. A magic wand. And let’s say it can all be yours…for just .99 cents.”

The timer read 0:00. The man walked back to the desk. He took the pencil and wrote “YOU’RE HIRED” on the stationary, and few days later, I moved to West Chester, PA. And a few days after that, I was on live television, face to face with the never-ending parade of trinkets and chochkes that comprise QVC’s overnight inventory.

I spent three months on the graveyard shift, five nights a week. Technically, this was my training period, which was curious, given the conspicuous absence of supervision, or anything that could be confused with actual instruction. Every few minutes a stagehand would bring me another mysterious “must have item,” which I’d blather about nonsensically until it was whisked away and replaced with something no less baffling. In this way, I slowly uncovered the mysteries of my job, and forged a tenuous relationship with an audience of chronic insomniacs and narcoleptic lonely-hearts. It was a crucible of confusion and ambiguity, and in hindsight, the best training I ever had.

Which brings me to the point of your question, Kyle.
I don’t agree with Howard Dean – not at all.

Here’s what I didn’t understand 25 years ago. QVC had a serious recruiting problem. Qualified candidates were applying in droves, but failing miserably on the air. Polished salespeople with proven track records were awkward on TV. Professional actors with extensive credits couldn’t be themselves on camera. And seasoned hosts who understood live television had no experience hawking products. So eventually, QVC hit the reset button. They stopped looking for “qualified” people, and started looking for anyone who could talk about a pencil for eight minutes.

QVC had confused qualifications with competency.
Perhaps America has done something similar?

Look at how we hire help – it’s no so different than how we elect leaders. We search for work ethic on resumes. We look for intelligence in test scores. We search for character in references. And of course, we look at a four-year diploma as though it might actually tell us something about common-sense and leadership.

Anyone familiar with my foundation knows my position. I think a trillion dollars of student loans and a massive skills gap are precisely what happens to a society that actively promotes one form of education as the best course for the most people. I think the stigmas and stereotypes that keep so many people from pursuing a truly useful skill, begin with the mistaken belief that a four-year degree is somehow superior to all other forms of learning. And I think that making elected office contingent on a college degree is maybe the worst idea I’ve ever heard.

But of course, Howard Dean is not the real problem. He’s just one guy. And he’s absolutely right when he says that many others will judge Scott Walker for not finishing college. That’s the real problem.

However – when Howard Dean called the Governor “unknowledgeable,” he rolled out more than a stereotype. He rolled a pencil across the desk, and gave Scott Walker eight minutes to knock it out of the park.

It’ll be fun to see if he does.

Posted by barrydean on February 19, 2015 in leadership, Mike Rowe, Politics

The Dangerous Book For Boys (Part 1)

about a new book just released called “The Dangerous Book For Boys” by Conn and Hal Iggulden. I have just purchased the book online at Amazon.com and await it’s arrival. Dr. Mohler gave the book a very possitive review. I cannot write any more about the book than to say read what is on in Dr. Mohler’s review of the book which can be found here. I have been looking for something to get my young adult boys away from the computer gaming systems. My wife and I finally had enough, and packed them all up and put them under lock and key. Now they will be looking for something to do after they get home from work instead of vegging out in front of the tube playing games. Lord willing they will get interested in some of the things that can be experienced and found in this book geared toward guys. I am looking forward to it.

After I have read the book I will provide my own review and experiences from it.

Bible Church. It was a great time of fellowship and worship. We had a guest speaker, Byron Yawn who is a close friend of our senior pastor Pat Abendroth. Byron is the senior pastor of Community Bible Church in Nashville, Tennessee where he has been pastoring for six years. Byron spoke to those in attendance about leadership. I will provide the outline he gave us Saturday. It was a great topic with a ton of information. The outline continues by clicking the link below. There is also a link to the audio of the session at the end.

END_OF_DOCUMENT_TOKEN_TO_BE_REPLACED

Posted by barrydean on May 8, 2007 in Byron Yawn, leadership, Local church, Ministry