RSS
← Ray Boltz has come out of the closet.
Spurgeon in Wordle → 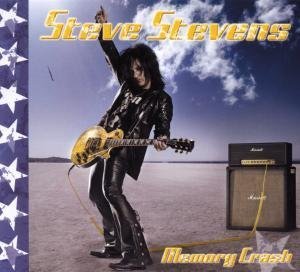 Unless you are a fan of the rock guitar or a big fan of Billy Idol you probably have not heard of Steve Stevens. Stevens was born Steve Schneider and is an American guitarist and songwriter. He can’t be all bad, we share the same birth year (1959) and same last name (Schneider). Stevens attended New York City’s prestigious Fiorello H. LaGuardia High School of Performing Arts as a music major. He studied the guitar and graduated in 1977. He is most known for his performances and writing with Billy Idol during Idol’s rocket to fame in the eighties. He is also a well known session guitarist and played all guitars on the successful solo album for Vince Neil of Motley Crue. The Neil, Stevens relationship began in the recording of the successful single “You’re Invited But Your Friend Can’t Come” for the movie “Encino Man”. Steven’s previous solo albums “Atomic Playboys” in 1989 and “Flamenco A Go Go” in 1999 both received some critical acclaim and brief commercial success. Steven’s has worked with many artists from Michael Jackson on “Dirty Diana”, to Peter Criss. He is most notable for his guitar effects work like the ray gun sound on Billy Idol’s “Rebel Yell”. He uses multiple devices and techniques to create the unique effect sound.

It’s been almost ten years since his last solo project but this newest release is getting great reviews on Amazon.com. The new album called “Memory Crash” was released on January 29th, 2008 by Magna Carta Records. For any guitar connoisseur, this mostly instrumental album is a sonic tour de force in the unique Steve Stevens fashion. First up is the intro “Heavy Horizon”. The lead in is typical overture with sound effects and the usual cool Stevens sonic twist. As soon as the quietness of the overture ends he begins a full throttle attack of the lower six with a cool riff on “Hellcats Take the Highway”. The song changes tempo a few times and definitely showcases this guitarist’s talent of technique and composition with the rock guitar. Next up is the title track “Memory Crash”. The song starts with another low end riff but morphs into a riff consistent throughout the song that is very reminiscent of Michael Schenker of UFO fame. The song is a funky tune laden with guitar technique and cool effects. The fourth track slows things down quite a bit. It begins with a dual acoustic guitar part, melds into more acoustic rhythms with an over-driven charged electric piece in the middle, and ends as it began. A very nice piece of artwork.

Album highlights obviously include the first four songs along with track five, a Hendrix meets Stevens cover of Robin Trower’s “Day of the Eagle” classic. The guest vocalist and bass player for this song is Dug Pinnick from King’s X. This is a tune Stevens says “Dug Pinnick takes to church with a Sly Stone spin.” In a Guitar Player interview Stevens describes using a John Suhr custom model to get the right tone for this song. He says he chose this song as tribute to Trower because

I love guys that can tell a story with their guitar parts without a lot of overdubs, and he was great at that.

You just gotta play a stone groove, and that is exactly what Stevens plays on “Cherry Vanilla”. The song is rich in wah wah and flanger effects for a cool psychedelic sound. The guitar solo vacillates between Trower influenced flanger tone to the psychedelic synthesized tone typical in many Stevens pieces. “Prime Mover” begins with a Flamenco-inspired intro but then shifts into an intense groove thang. He displays some incredible chops with his freaked out guitar solos in this track. I see visions of Hendrix, Malmsteen, Satriani, and Van Halen in the solos throughout this groovy track.

It has been a while since I have listened to an album that is filled to the digital brim with as much inspired, passionate, and entertaining value as this release by Steve Stevens. I will be listening to it over and over at the gym on my mp3 player and elsewhere. Without wavering I give this album five flying V’s out of five. Rock On Stevie!

Please check out the video below.

← Ray Boltz has come out of the closet.
Spurgeon in Wordle →