RSS
← Professing ignorance?
Is this really a church? 2.0 → 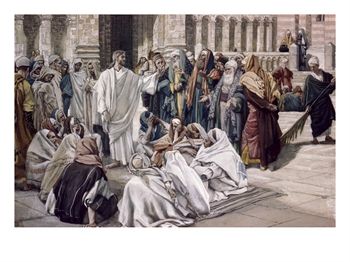 I am currently reading through the book of John in the bible. Today as I completed chapter eight I came across this verse close to the end, verse 58 to be exact, where Jesus undeniably states that he is God. This takes place right after Jesus had truthfully defended the woman who had been caught in adultry and brought to Him. Throughout this chapter He has been more or less debating with the Jews about who He is. The Jewish leaders seem to believe their “ace in the hole” is the proclamation that their father is Abraham. It is then that Jesus turns up the heat on their pride and sin and proclaims:

Now this proclamation not only offended the Jewish leaders but it also flys in the face of a couple of American religions of today. The Mormons claim that Jesus was a man who obtained deity. They believe that He is a created being and the brother of Adam and Lucifer. The Jehovah’s Witness believe much the same way. They also believe that Jesus is a created being and not God. They claim to be declaring the witness of God. But essetially what both of these religions are doing is denying the very witness that God reveals in the New Testament. That Jesus is who He claims to be. In John 10:30 Jesus again states:

I and the Father are one

And again the Jews were incredibly offended as the Mormons and Jehovah’s Witnesses would be today if you were to point that out to them. The New Testament declares throughout:

He is the brightness of the Father. He is the express image of God. He is literally the replica, the duplicate of the invisible God.

So as I read the scripture this morning, I couldn’t help but marvel at this truth revealed to us. The mystery of the invisible God revealed in Jesus Christ. He is who he claims to be. He is God.

For further reading about the Incarnation of Jesus Christ I would recommend the text from a sermon by Dr. John MacArthur called “The Inside Story of the Incarnation“.

← Professing ignorance?
Is this really a church? 2.0 →

9 responses to “Before Abraham was, I am”