RSS
← Evangelism and the sovereignty of God (Part 2); Apologetics
Is this really a church? →

I have had today’s music review waiting in the wings since it’s release last month. Due to the exclusivity of the release and 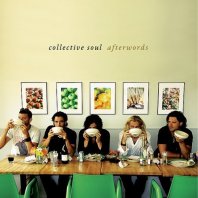 the new digital format of the downloadable tracks (which are currently incompatible with my MP3 player) I have had to delay this review until now. The name of the band is Collective Soul and they are from Stockbridge, Georgia. They have been recording great music for about 12 years now. The band name was derived from a term used in Ayn Rand’s book “Fountainhead”. As Ed Roland, the band’s singer/songwriter, puts it “we’re not preaching Ayn Rand, objectivism, egoism, or anything….we just dug the name…it could’ve come out of Motorcycle Magazine.” Collective Soul consists of original members and brothers Ed and Dean Roland, Ed on lead vocals, guitar, keyboard, and producer, Dean plays rhythm guitar, Will Turpin on bass percussion and vocals, Joel Kosche on lead and rhythm guitars, and Ryan Hoyle on drums and percussion. One final note before I get to the album. The brothers Roland grew up pastor’s kids. Their dad was a southern baptist pastor for many years, this must be why their songs are full of elements of Christianity.

The title of Collective Soul’s newest album is “Afterwards” and is the seventh studio album from the band. It was released August 27th, 2007. Collective Soul has been characterized by heavy guitar riffs with catchy melodies and this album is no exception. The first track “New Vibration” is definitely both heavy and melodic. It has a heavy guitar groove rhythm while Ed looks for a “new vibration.” The next track “What I Can Give you” will no doubt be the second single for the album behind “Hollywood”. The song is very catchy, and makes you hum right along. “Never Here Alone” is such a unique and upbeat song. I read a review on Amazon.com where the reviewer liked all the songs but this one. The guitar riff played throughout with it’s synthesized effect is very cool. I like it just fine. The next track is called “Bearing Witness”. The lyrics look so personal, like he is writing to his wife or girlfriend while he is on the road, “I’m promised here, you’re precious there”. The following track “All That I Know” is such a great song to sing along with. It is a slower song with some very nice lead guitar work that flows into a cool jazzy sound. The first single from the album is “Hollywood” and the song could be a song of love expressed to someone named “Hollywood” or a somewhat sarcastic tone for the “movie town”. It is a very likable song and it rocks.

Album highlights are “New Vibration”, “All That I Know”, “Hollywood”, “Good Morning After All” for it’s use of lyrical contrast by expressing pain and hurt but when it’s all said and done you still encourage folks with “Good Morning!”, “Never Here Alone”, “Persuasion of You” and it’s super cool use of guitar sounds and great solo, and finally “Georgia Girl” and one of my favorite lyrical verses on the album:

This album has met all of what I generally look for in an album. It rocks, it has lyrical prowess, and the song tracks each stand on their own. I recommend this album to anyone. It would be a nice addition to any collection. Musically the album is excellent and is to be expected from these guys. The album as a whole is the best one I have reviewed since I started and the best album I have heard all year. I give it a BarryDean4Christ five stars out of five.

I usually try to present the current video in circulation but I would rather post one of my favorite live performances from Collective Soul (well two of them). The song is called “Under Heaven’s Skies”. It’s a beautiful acoustic version of the original recording. The lyrics are supplied below and the video below that.

Whenever I taste honey from your lips
It’s a moment of purpose only you can give
Whatever I hear whatever I may see
Whatever my cause, dear, I know you’ll believe

If ever you think careless is the night
I’ll comfort you with silence till the morning light
Wherever you turn, wherever you may roam
Whatever you conquer, I’ll always be your home

← Evangelism and the sovereignty of God (Part 2); Apologetics
Is this really a church? →