I did not find out until this week that Skip Carey, an icon in the field of sports broadcasting, had passed 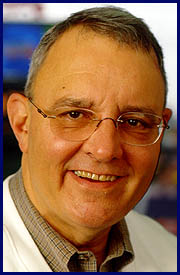 away. Skip passed away in his sleep Sunday afternoon August 3rd. His death was announced by the Atlanta Braves. The cause of death has not been determined yet but he had been in declining health with diabetes and liver problems in recent months. See the NY Times article here.

His dad, Harry Carey, became a household name broadcasting for the Chicago Cubs, as did Skip by broadcasting for the Atlanta Braves for 32 years. Skip’s shining moment came at the bottom of the ninth in the seventh game of the 1992 National League Championship Series against the Pittsburgh Pirates, when a lumbering runner, Sid Bream, chugged home from second on a single to win the game for the Braves and send them to the World Series. I was watching the game on TV that night and I can still recall the pandemonium. The historical play is in the video below (although the video action is broken a bit) along with the audio from Skip Carey’s play by play. I will miss Skip Carey and his witty commentary. Braves Win! Braves Win!! Braves Win!!!

ht – Steven Altogge at The Blazing Center for prompting me for this idea with his Greatest Moments in Sports History post.