I’ve been singing the praises of The Answer on Facebook lately, so I decided to introduce them here on my blog. I 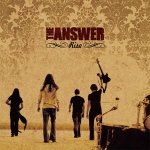 was introduced to the band by fellow blogger Rob Rockitt @ Hard Rock Hideout a few weeks ago. Until then I had never heard of them. I downloaded their UK hit “Never Too Late” from their album release “Rise” and loved it right away. So I downloaded another, loved it, and another, and another, each time thinking that the taste to hear more would flatten out. It never did. I have since found out that their only release in the United States came last year in the form of an EP. They have a new release for the U.S. coming March 31st called “Everyday Demons”. I am looking forward to that.

The Answer is a hard rock blues band from Northern Ireland. They are Cormac Neeson on vocals, Paul Mahon on guitar, Mickey Waters on bass, and James Heatley on drums. The band has many influences, but their biggest influences have come in the form of such classic blues rock greats as Humble Pie, Free, and Led Zeppelin. Many kudos have been heaped on this Northern Ireland quartet; but the praises that weigh greater are not from peers, but from already crowned rockers like Jimmy Page of Led Zeppelin, and Joe Elliot of Def Leppard, who are also fans.

END_OF_DOCUMENT_TOKEN_TO_BE_REPLACED

Posted by barrydean on January 23, 2009 in Music Review, Rise, The Answer