Of hummingbirds and bees

This past Labor Day weekend my lovely wife and I took a trip south. Specifically to Hampton, Georgia and 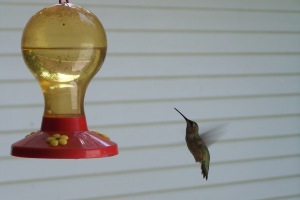 then Chattanooga, Tennessee. We left Wahoo, Nebraska around 1am and drove 18 hours in shifts down to Georgia to visit my cousin Judy and her husband Howard (also know by family as Ole Weird). After a day or so of visiting in Georgia we headed back north to Chattanooga.

Our visit with Judy and Howard in Georgia was a wonderful visit filled with late night conversation, honey harvesting, and good old Southern hospitality. During our family reunion my wife developed an interest in bee keeping thanks to “Ole Weird” who is an avid bee keeper. So needless to say she was greatly excited at the prospect of helping him harvest some honey from his bees. I will let her share her experiences of that event from her blog.

Prior to Robin and Howard donning their bee suits to pillage the bee honey, we were sitting on their back deck talking and something very fascinating transpired. Howard and Judy have a couple of hummingbird feeders hanging from rafters above their deck. While we were talking several hummingbirds began to hover around the feeders. They were chasing each other off to get to the feeders and making quite a racket. I was amazed at how close they were getting to us. Pretty soon several more hummingbirds showed up and we had a nice buzzing and commotion going on. I got my digital camera out and tried to take some still photos. The birds were zigging and zagging in and out so much it was hard to get a still photo. So I got the idea to set my camera to video and recorded the video below. I held the camera while they basically swarmed in and out and around the deck. I only captured them in video for a little over a minute but you can hear them chirping and buzzing throughout it.

I was also amazed at God’s creation in the hummingbird itself. Here are a couple of things I have since learned about hummingbirds. Did you know that the hummingbird is the only group in the bird family that can fly backwards? The wings of the hummingbird will beat 15 to 80 times per second depending on the species. That is so amazing to me.

Later in the week I will post something about the visit with our daughter Amanda, her husband Reece, and our adorable granddaughters in Chattanooga.

← Obama to use the New Living Translation
John Fogerty – Revival →

6 responses to “Of hummingbirds and bees”