What next, the golden dome at Notre Dame?

Today, it was announced by the London Daily Sunday Times that the famous and iconic clock Big Ben would be 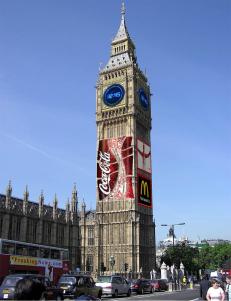 going digital. Not only would it be going digital, it would also be featuring advertisements. “This is an effort to bring the historic land mark up to the contemporary times”, said Ian McFane, with the British Travel Ministry of London and Buckingham. He also went on to say that “the advertisements were an effort to bring in revenue for the faltering British economy.” I have to imagine what the Old English gents in London think about using this once historical and traditional center piece of the old city for this means.