We will miss you Tony Snow

As I got online for the first time this morning I read a headline from Yahoo News that made my heart sink. 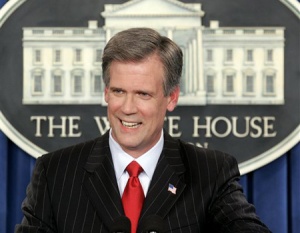 Long time Foxnews anchor, White House press secretary, and Rush Limbaugh Show fill-in host Tony Snow had died early this morning. I almost immediately went to my fellow blogger, and brother in Christ, Leo’s blog to see if he had picked up on the news, and sure enough he had. I would recommend that you go read his posting because he references some nice articles by John MacArthur on “True Belief”, and John Piper called “Don’t Waste Your Cancer”. One of the things Leo brings forward is Tony Snow’s faith in Christ. Like most conservative, bible believing, Christ uplifting, born again Christians, I would like to believe that Tony was a believer. Since I did not know him personally, I set about to find something to support this notion. I found an interesting article written by columnist Cal Thomas that gives us a nice look inside Tony Snow and his relationship with Christ. As believers we are not the ones to judge a person’s heart concerning Christ, for only God knows the heart. But we can be fruit inspectors, and it looks as though Tony had some fruit in his life. My hope is that he is a true believer because my mother adored Tony Snow and now she can finally meet him.

Before I close this posting I’d like to leave you with a video of Tony Snow. It is a very appropriate video here @  BarryDean4Christ. Tony Snow plays “Stormy Monday” with Leslie West of Mountain at the Rock ‘n Roll Fantasy Camp.

← Evening Pics
Relient K – The Bird and the Bee Sides + →

6 responses to “We will miss you Tony Snow”