Today I am reviewing another new, up and coming, band. I had not heard of this band 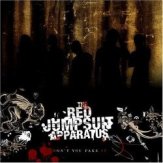 until I heard them on the local college radio station. The song I heard impressed me so much that I had to seek for more of their music. Of course a serious search was never initiated until a conversation with my youngest daughter, Crysta, about music revealed that she liked this band too. That conversation coupled with Crysta getting me an iTunes gift card for Christmas prompted me to use it to download The Red Jumpsuit Apparatus album. The Red Jumpsuit Apparatus was formed in 2003 and are based out of the Jacksonville, Florida area. You will have to admit like me that one of first things I wanted to know about the band is how did they come up with the cool band name. According to a couple of web sources the name was derived by placing random words on the wall and a blindfolded band member selecting three words. So we have The “Red” “Jumpsuit” “Apparatus”.

Their debut album “Don’t You Fake It” was released July 18th, 2006 and has sold well over 1 million copies in the U. S. alone. The album begins with a hard rockin’ song which contains the album title in the song’s chorus. The song is called “In Fate’s Hands” and it starts the album with a nice head-banging rhythm with some not-so-subtle screaming vocals stating:

Shake it, break it, get off your feet,
come dance with me and don’t you fake it.

The guitars rock your face off. The next track is “Waiting” and is a simple rock and roll song coupled with the typical young man searching for meaning in life and trying to break from a depressing, monotonous life. The lyrics to the next song “False Pretense” are more sophisticated and speak about being careful what you take seriously, because it just might be built on a false pretense. The next track is the band’s hugely popular song called “Face Down”. The music is a fast paced rhythm with a great guitar sound. It also contains pinch harmonics and pick scrapes. It’s almost old school. The lyrics are very mature. Here is the chorus:

Do you feel like a man
when you push her around?
Do you feel better now as she falls to the ground?
Well I’ll tell you my friend, one day this world’s going to end as your lies crumble down, a new life she has found.

END_OF_DOCUMENT_TOKEN_TO_BE_REPLACED

Posted by barrydean on January 9, 2008 in Don't You Fake It, Music Review, The Red Jumpsuit Apparatus