We’ve all heard the legend of St. Nicholas or the commercialized version of Santa Claus. Did you know that St. Nick was once arrested and thrown into jail? That’s right boys and girls, St. Nick 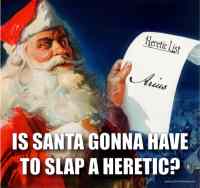 was once naughty himself. Maybe you’ve seen the memes of St. Nicholas and his behavior with Arius and wondered what it was all about. Here’s how the legend goes:

The time was 325 AD, and Constantine, the Roman Emperor from 306 to 337 AD, sent a request to all the bishops in the world to gather for a council, which became the First Council of Nicaea. One of the attending bishops was St. Nicholas. Nicholas was a bishop from Myra, Lycia (part of modern day Demre, Turkey) and an eventual signer of the Nicene Creed. Nicholas was a staunch defender of the Orthodox Christian position and a religiously devoted presbyter.

It has been told that during the council, Arius, a bishop from Alexandria, Egypt, was asked to defend his position of the inferiority of Christ. He held the position that Jesus was created by God at his birth, and that Jesus was not part of the original Godhead. During Arius’ lecture Nicholas became so irritated that he got up and punched Arius in the face. Emperor Constantine and the other bishops were so surprised by this behavior that they stripped Nicholas of his office of bishop and thrown into jail. He was eventually released from jail by Constantine and reinstated as bishop.

The following are some more of the legends of Santa Claus:

With such a popularity, his legends inevitably became intertwined with others. In Germanic countries, it sometimes became hard to tell where the legend of Nicholas began and that of Woden (or Odin) ended. Somewhere along the line, probably tied to the gold-giving story, people began giving presents in his name on his feast day. When the Reformation came along, his following disappeared in all the Protestant countries except Holland, where his legend continued as Sinterklass. Martin Luther, for example, replaced this bearer of gifts with the Christ Child, or, in German, Christkindl. Over the years, that became repronounced Kriss Kringle, and ironically is now considered another name for Santa Claus. (cited from The Real St. Nicholas)

You better watch out
You better not cry
Better not pout
I’m telling you why
Santa Claus is coming to town.