This morning I was listening to some older Guardian during my Bowflex workout. Guardian is a Christian rock band who was very popular in Christian music circles in the 90’s. During the workout I came across the classic “Lion’s Den”. The story of Daniel and the lion’s den is a little more 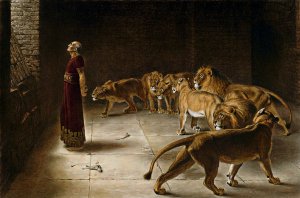 engaging now, because we are studying Daniel in our Wednesday night Bible study.

The song by Guardian was written by Steve Taylor who is a masterful lyricist. The music is excellent, released in 1995, even now, it’s a pleasure to listen to. Especially while working triceps.

Here are the lyrics:

Once upon a time, in churches of old
The Velcro age had yet to unfold
Flannel was king and Sunday School knew
How to make those Bible heroes, stick like glue
How to make ’em stick with you

Flannel graph lions, mounted and mean
The Prophet Daniel in between
Head toward heaven, sturdy and true
A man of God who did not fear the gods of men
He didn’t fear the lion’s den

Every age at every stage
Lions rage
Pray, stand your ground
They’ll lie down

Dumb struck, I was shaken and stirred
He wouldn’t kowtow, he kept God’s word
Teacher said, “Son, this could be you
If you put your trust in God and not the praise of men
You won’t fear the lion’s den”

And if we play by lion’s rules
We start lionizing fools
God wrote the book, He’ll fortify
And like the eagles we will fly
We’re gonna fly

Late one night in a fever dream
The Prophet Daniel came to me
“Sir,” I said, “I’ve lost my nerve
I lip serve God and put my faith in Godless men
I fear the lion’s den”

Then he said, “Who says I’m not a feline-phobe?
Who says I wasn’t ready to wet my robe?
Faith is tough, boy, but God gives grace
So take deep breath, head up, set your face like flint
And stop being a wimp”

Here is the a video with the music:

Posted by barrydean on September 5, 2015 in Daniel, Guardian, Lion's Den