RSS
← A funny thing happened on the way to defining a church.
Book Review – Finally Alive →

Book Review – How Should We Then Live

Preface: This book, “How Should We Then Live, The Rise and Decline of Western Thought and Culture“, is also the title of 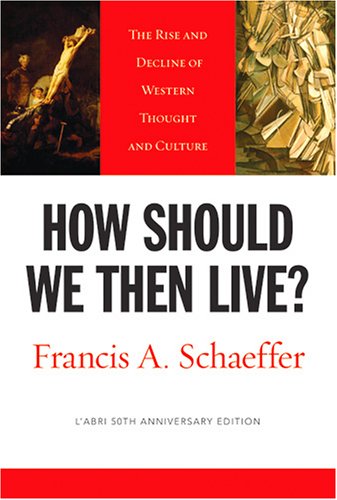 an accompaning film directed by Schaeffer’s son Frank. I will be focusing on the book in this review. Since this is my first attempt at a book review, it may look like other reviews you’ve seen. I will have modeled the format from other book reviewers I’ve read. Like here and here. Lord willing I will be attempting other book reviews as I get more comfortable with my own format. So here goes.

Francis A. Schaffer (Jan. 30, 1912 – May 15, 1984) was an Amercian Evangelical Christian theologian, philospher, and Presbyterian pastor. Schaeffer authored many books and, along with his wife Edith, established the L’Abri community which now has locations all over the world.

I just finished reading this book (side note: My wife argues that it really isn’t reading since I am really listening to the audio version as I commute to work each day) which hasn’t given my comprehension the full time that it needs to digest all that I’ve read. But what I am comprehending continues to impress me. Schaeffer’s giftedness in philosophy and theology are evident throughout the book. As the book’s subtitle “The Rise and Decline of Western Thought and Culture” indicates, Schaeffer takes us through marked times throughout earth’s history that has influenced much of  what we call Western civilization. Each chapter is basically focused on these time periods.

He begins with Ancient Rome in chapter one. The Greek philosphers and culture had a large influence on Ancient Rome.  Two of the more prominent Greek philosophers were Aristotle and Plato. For Plato, true knowledge came from outside of our own little world. Knowledge gained through the senses is always confused and impure. On the other hand, Aristotle, a student of Plato, believed in knowledge obtained through the senses. This philosophy would set the stage for what would later become scientific method. Next came the Middle Ages and a time of uncertainty. Great advances were made by the church and also great distortions of biblical truth. This time period ushered in the two periods that were somewhat simultaneuos, The Renaissance, and The Reformation.

The Renaissance taught that man and nature were of most importance and later became known as humanism. But by making man the measure of all things it would eventually purge out the very importance of man. This movement of focusing on everything else such as man and his world is what Schaeffer refers to as “the particulars”. The Reformation taught that man was free from the iron fisted dominance of the Roman Church but it did not lose sight of the bible and absolute values. The key figures for the Renaissance era were Desiderius Erasmus, Machiavelli, and René Descartes. Key figures in The Reformation were: early on Jan Hus, then later Martin Luther, Huldrych Zwingli, William Tyndale, and John Calvin.

What stuck out for me is the way Schaeffer points out the influences these two time periods had over literature, music, and art. The focus of music and artwork influenced by The Renaissance was man, nature and “the particulars”. Artists like Raphael, and Michelanglo. In contrast The Reformation influenced the artists to focus on those things of God and outside of man. Artists like Albrecht Durer, and the great composer J.S. Bach, although Bach is considered to have lived a few years beyond The Reformation. An honorable mention should go to Rembrandt who was a supporter to the Reformation although according to history he never renounced Roman Catholicism.

Schaeffer goes through the remaining time periods like The Enlightenment and key figure Jean-Jacques Rousseau, The Rise of Modern Science, Modern Philosophy and Modern Theology which is basically of the liberal nature, Modern Art, Music, Literature, and Films, Manipulation and the New Elite, and puts forth what the alternatives are in our new and modern society.

The last few chapters summarize the book and the periods it describes and in a nice way elaborates of the book’s title. It is a warning bell to those who have a God-centered worldview to plead with your neighbors and friends to turn from the failed view of man-centeredness and it’s arbitrary absolutes to a God-centered view with His biblical absolutes. What Schaeffer warned about is happening in our world today. While America’s Declaration of Independence declares that “all men are created equal” and “endowed by our Creator with certain inalienable rights,” society allows abortion on demand at any stage of pregnancy. In April of 2005, the world watched as a severely disabled but not terminally ill woman, Terry Schiavo, was dehydrated to death—simply because her legal guardian husband and his lawyer did not want her to live. In conclusion I will leave you with Schaeffer’s stated reason for the writing of the book and subsequent film. The following is from the book of Ezekiel 33:1-11 ESV. God is calling for the raising up of a watchman to sound the alarm of warning. The warning to the people of Israel that God is coming with a sword to purge the wicked. To turn from their wickedness so they might live.

10 And you, son of man, say to the house of Israel, Thus have you said: Surely our transgressions and our sins are upon us, and we rot away because of them. How then can we live? 11 Say to them, As I live, declares the Lord God, I have no pleasure in the death of the wicked, but that the wicked turn from his way and live; turn back, turn back from your evil ways, for why will you die, O house of Israel?

Posted by barrydean on July 17, 2009 in Ezekiel 33, Francis A. Schaeffer, How Should We Then Live, Western culture, Western thought

← A funny thing happened on the way to defining a church.
Book Review – Finally Alive →

5 responses to “Book Review – How Should We Then Live”