It is once again Tuesday and time for another music review. Today I will be reviewing an 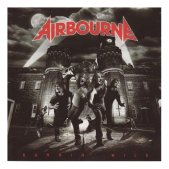 album from a band who is “down under”. That’s right, they are from Melbourne, Australia but originally moved from Warrnambool, Victoria, Australia. The band is Airbourne. They are a fairly new band. They released an eight track (visions of square plastic cartridges) EP in 2004 but, the album I am reviewing is their first full length album. The genre of Airbourne is categorized as pub-rock. I can summarize them down to one word, “attitude”, rock n’ roll attitude. They epitomize the attitude of the early to mid 1980’s arena rock bands. It has been said that Australia is a few years behind in pop-culture. But with this band, it’s almost as if they ignored the grunge rock phase America went through in the 1990’s. That grunge phase has effected many hard rock bands of today. The effect has made the lyrics and music darker and more moody. With Airborne, the classic “in your face” rock n’ roll attitude is back, alive and well.

The album title is “Runnin’ Wild” and was released to the U.S. on January 29th, 2008. “Alright people! Welcome to the show!” These are the first words heard as album starts with a guitar explosion in “Stand Up For Rock N’ Roll”. The music and sound are reminiscent of early AC/DC, as it is with many of the tracks on the album. “Runnin’ Wild” is the next track and is the also the album title. The song is definitely about young man angst about breaking up. The following song is the epitome of the “attitude” I spoke of earlier. It is called “Too Much, Too Young, Too Fast”. The chorus lyrics say it all:

The next track “Diamond In the Rough” is such a simple rock song with some real good old rock n’ roll guitar. This is followed by “Fat City” which is “juiced up and ready” for a night of rock n’ roll.