This week I going to review another album by a band I had only heard about but have not actually listened to. Now I love to listen to new 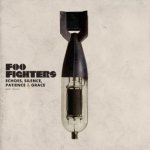 bands and new music so why would I not listen to a rock band as popular as the Foo Fighters? Frankly I couldn’t get past their name. I mean what is a Foo and why would you want to fight it? So, again, after hearing one of their new songs on the local college radio station I had to research the origination of their name. The second sentence in Wikipedia for Foo Fighters states that the group is named after the World War II term used to refer to mysterious aerial phenomena. Ok, that sounds pretty cool. I like WWII stuff and phenomena is even better. The genre of their music is listed as alternative, post-grunge, hard rock. The Foo Fighters were formed by Dave Grohl who was the drummer for the Seattle grunge band Nirvana. Now that is not something I knew. Now onto the album.

The new album by the Foo Fighters is called “Echoes, Silence, Patience, and Grace” is their sixth studio album. It was released September 25th, 2007. The album entered the Billboard 200 album chart at #3, selling over 168,000 copies in it’s first week of release. Dave Grohl noted in an interview that the band was eager to expand on their signature sound:

So the album we’re making sounds like a Foo Fighters album, but it’s definitely moving in a few different directions. It’s cool man, I love it.

The first single released from the new album is called “The Pretender” and starts things off with a very cool song with many different guitar sounds and an exciting rhythm and chorus.

The next track “Let It Die” about love lost starts out slow and mellow and builds to a crushing crescendo. Like Grohl said, “cool man”. The next song on the album is called “Erase Replace” it has a very cool drum beat and rhythm. It makes the song sound a little heavier than the previous songs on the album. But in the middle of the song it gets downright pensive and dreamlike. The next track is “Long Road To Ruin” and is the second single released for the album. It is definitely a different song from anything else I have heard from this band. The sound is very familiar but I can’t put my finger on it. The vocals are excellent.

Highlights for the album are “The Pretender”, “Long Road To Ruin”, “Come Alive” which has a reminiscent sound to Crosby, Stills, and Nash “Cheer Up Boys (Your Makeup is Running)” which is a a fairly typical song but I just like the cool song title, “Summers End” is also like Crosby, Stills, Nash, and Young, yes the guitars even sound like Neil Young, “The Ballad of the Beaconfield Miners” is a neat instrumental piece that is a nice change of pace, “Home” is a simple melancholy ballad with piano and some drums, it contains the album title:

This album very well put together. I appreciate how the Foo Fighters have established a diverse collection of songs for this album. Each one sort of stands on its own. The vocals are first rate and emotionally driven. The music is put together in such a way as not to allow the listener to get bored or to anticipate the next measure in the song. As a musician I really enjoy that. Since this is my first real complete listen to one of their albums I am going to give it a conservative four stars out of five. But I can tell you that after three listens through I know it will grow on me. I will definitely be listening their previous album releases.

Please check the video below for the Foo Fighters song “The Pretender”.

← Olivia’s night out
Another Puritan quote →