Christmas is almost upon us again. When I think of Christmas music I almost immediately think of the music from the band I 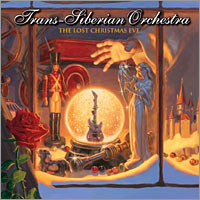 am going to review today. I have mentioned them in some of my other postings but have never reviewed any of their albums. I have been waiting for Christmas to come around because most of their albums focus on Christmas music. The band is Trans-Siberian Orchestra. I will refer to them as TSO in order to save me some key strokes. Anyone who is a fan of their music would recognize the acronym anyway. TSO was formed in 1996 by Paul O’Neill, Robert Kinkel, and Jon Oliva. Together they wanted to write rock operas. O’Neill dreamed of writing music so melodic it did not need lyrics, and lyrics so poetic they didn’t need music. The sum of the parts for the songs would be greater than the whole. Their biggest dilemma was that in order to create the opera the way they envisioned it they would need to have several different voices for the vocal parts. Most bands only have one lead vocalist, and on rare occasions two members who have strong vocal abilities. So they proceeded out into the classical, rock, Broadway, and R & B worlds to find the very best singers and musicians to bring each song to life. I love this quote by Paul O’Neill. When asked what Trans-Siberian Orchestra is about, Paul O’Neill replied “It’s about creating great art.” When asked to define what great art was, Paul said, “The purpose of art is to create an emotional response in the person who is exposed to the art. Seeing the pieta, the world famous sculpture by Michelangelo can cause someone to feel the pain of losing a child even if they’ve never had one. When you’re trying for these emotions the easiest one to trigger is anger. Anyone can do it. Go into the street, throw a rock at someone, you will make them angry. The emotions of love, empathy, and laughter are much harder to trigger, but since they operate on a deeper level, they bring a much greater reward.”

TSO has three Christmas albums but I am going to review their most recent one. The title is “The Lost Christmas Eve” and it is one of their best so far. The album was released October 12th, 2004 and begins with “Faith Noel” which is their version of “Noel” and “Oh Come All Ye Faithful” with piano and rock lead guitar. The next track is the album title “The Lost Christmas Eve” and introduces the story behind the music. The story surrounds a little angel coming down from Heaven on a mission from God to find a person most like the image of His son. “Christmas Dreams” is about a little girl that is met by the lead character and touches his calloused heart. It’s a neat story of hope. “Wizards In Winter” is and instrumental piece the next track. The piece has been made famous as the music that accompanies the Christmas lights displays seen on YouTube.com and the like. It is a great rock orchestrated piece of music.

Album highlights are “Faith Noel” which I am trying to learn on guitar, “Wizards In Winter”, “Queen of the Winter Night” has a great combination of piano, vocals, and hard rock guitar, “Christmas Night’s In Blue” is a neat blues themed song depicted in a blues club. “Christmas Jam” is another rock guitar instrumental piece composed by Paul O’Neill. “Siberian Sleigh Ride” is very remenicient of guitar work from Joe Satriani and sounds great on the album. One of my favorites on this album is the instrumental “Wish Liszt (Toy Shop Madness)” with it’s visions or sugar plum fairies that wear boots and band their heads, and the newest version of “Christmas Canon Rock” that is such a neat piece composed for piano and guitar.

The story behind the music isn’t even close to being theologically sound and uses great liberty with the character or God and His angels. But all this aside the album does tell a precious moral story. If you visit the Wikipedia site you will get the complete synopsis of the story. In my humble opinion the music is first rate and diverse enough to keep any music lovers attention. I believe Paul O’Neill and company have created great art with this release. I give it an unprecedented five out of five stars from BarryDean4Christ.

Please check out their video from “Faith Noel”.

One response to “Music review Tuesday”