Today I did something a bit unusual. I did not have a definite idea on what album to do for Music Review Tuesday. So while 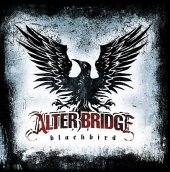 I was out and about running some errands I stopped at a local big box retailer and cruised their new music racks for something interesting to review. I selected a CD based on it’s cover art. The band is Alter Bridge. I have heard some of their songs on the local college radio station 89.7 The River here in Omaha. I really had no idea who they were or where they came from until I read the Wikipedia site. All of the band members are original ex-members of Creed except the lead vocalist. They are Miles Kennedy on lead vocals and guitar, Mark Tremonti (founder) on guitar and vocals, Brian Marshall on bass guitar, and Scott Phillips on drums. The band was formed by Mark Tremonti in 2004 after the breakup of Creed. I have listened to Creed for many years so I have heard many recognizable characteristics from these band members, especially Mark Tremonti. The name Alter Bridge was derived from the bridge on Alter Road that runs between Detriot and Grosse Pointe Park in Michigan where Mark Tremonti grew up.

Blackbird is the second album from Alter Bridge, and I will have to say that after listening through it twice now that it is definitely much better than the Scott Stapp solo work. Stapp is the troubled singer/songwriter from Creed who split with the rest of the band. But enough of that. It is yesterday’s news. Blackbird is good enough to prompt me to check out their debut album. You may see it here in the near future. The album was just released today October 9th, 2007. The first track on the album is “Ties That Bind”. This song is such a hard rock guitar song. The constant wailing on the low end strings drive the rhythm of the song and the guitar solo is awesome. It is so nice to have two accomplished guitarists in the same band, because as a result you get some incredible guitar music. Which anyone here can attest to, I love that guitar music. The lyrics to the song tell of breaking free from a controlling influence. Most likely a controlling person like a parent or a spouse. The next track “Come To Life” sounds so self descriptive of the struggles the members have been through. The music is classic Mark Tremonti with an added rhythmic harmonic presence. It sounds so cool, reminiscent of Zak Wylde of Ozzy fame. “Brand New Start” is a song that tells of starting afresh from a life of sorrow and agony. The song rings true of a passion for starting over. It reveals the great vocal talent of Miles Kennedy. The style is very similar to Brent Smith of Shinedown. They both have a great vocal range. The next track is called “Buried Alive” which is another song of life struggles and overcoming them. I am starting to see a pattern here, are you? The theme of the band is definitely overcoming life’s obstacles and reminds me of the rock band Triumph from the late 70’s and 80’s with a much heavier sound.

Album highlights are “Ties That Bind”, “Come To Life”, “Coming Home” about missing your home, “Rise Today” the album’s first single and a great rock song, “Before Tomorrow Comes” it has such great guitar effects and awesome vocals it definitely showcases the talent of Miles Kennedy “we could be so much more than we are” , “Watch Over You” which asks the question “Who is gonna save you when I’m gone, who’ll watch over you when I’m gone?”, “White Knuckles” and its fast paced head banging guitar riffs and great drumming. The album and the band as a whole are similar to Creed in some respects but different in vocals and they have a much fuller guitar sound. More importantly it Rocks!!! This component is very important to BarryDean. I give the album 4 stars out of 5. But it may go up the more I listen to it. Rock On!!!

Please check out the video for the albums first single “Rise Today”, it is a great rock song.